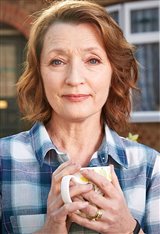 Born in Brighton and raised in Hove, England, Lesley Manville decided she wanted to be an opera singer when she was eight years old. After winning several singing competitions in Sussex, she was accepted at age 15 into the Italia Conti Academy of Theatre Arts, a school based in London, England.

Lesley made her professional stage debut not long after in 1972 in the musical I and Albert, directed by John Schlesinger in London's West End. She made her television debut in 1974 with guest appearances on the British shows Village Hall and Softly Softly: Task Force, as well as on four episodes of Coronation Street, and then in 1975, landed a regular role as Rosemary Kendall on the series Emmerdale Farm.

She met her first husband, actor Gary Oldman, while they were both working at at the Royal Court Theatre. They married in 1987 and in 1989, co-starred in an episode of the BBC series Screen Two, titled The Firm, when Lesley was pregnant with their son Alfie. However, Oldman left the marrage just three months after Alfie was born and moved to the States, where he has lived since, leaving Lesley to raise Alfie as a single mother.

Over the years, Lesley has had much success on the stage, appearing in many plays as well as on the screen in multiple TV series and feature films. For her work in the 2003 film All or Nothing, Lesley received the British Actress of the Year award from the London Critics Circle Film Awards. She received the same honor in 2011 for her work in Another Year (2010), as well as Best Actress for her work in the same film from the American National Board of Review. Both films were directed by Mike Leigh, with whom she often works, having first worked with him on stage with the Royal Shakespeare Company and then on a BBC radio play.

For her performance as Helene Alving in the stage revival of Ghosts, Lesley won a 2013 Critics' Circle Theatre Award and a 2014 Laurence Olivier Award.

In 2015, Lesley was made an Officer of the British Empire by Queen Elizabeth II.

Most recently, moviegoers saw her play the role of Flittle in the blockbuster Maleficent: Mistress of Evil (2019), starring Angelina Jolie in the title role. She also starred opposite Liam Neeson for the first time in the drama Ordinary Love (2020).

Lesley, who makes her home in London, divorced her second husband, actor Joe Dixon, in 2004.