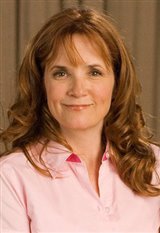 "I'm kind of the girl next door," says Lea Thompson, who was born in Rochester, Minnesota. A professional dancer from the age of 14, Thompson continued to train through her teen years courtesy of scholarships to the Pennsylvania Ballet Company, the American Ballet Theater and the San Francisco Ballet. That was before Burger King came calling when they cast her in a TV commercial.

Her big break came when she was cast along Michael J. Fox in Back to the Future, which became a huge hit. She would reprise her role as Lorraine McFly in two sequels. And just as Fox would find his way back to TV on Spin City, Lea also found herself on the small screen with her starring role in Caroline in the City. I guess you could say both Fox and Thompson are just a couple of "city" kids at heart. But as to what real power in the entertainment industry means to Thompson, she says, "Never having to audition again."

Although she remained busy after Caroline in the City ended in 1999, her next big hit TV series would be in 2011 with Switched at Birth, in which she played the mother of a girl whom she'd raised, and her deaf biological daughter, who was raised by another woman. The series enjoyed 105 episodes before concluding in 2017.

Since then Lea has played Marmee in a new version of the classic tale Little Women (2018) for the big screen and she has also played the role of Jules Osborn-Burgess, the mother of the title character, in the Netflix film Sierra Burgess is a Loser (2018).

Lea has been married to producer/director Howard Deutch since 1989. They have two daughters together. Both daughters, Madelyn Deutch and Zoey Deutch , are successful actors.