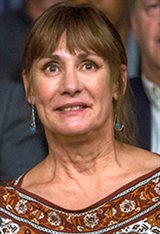 Born in Carbondale, Illinois and raised in Edwardsville, Illinois, Laurie Metcalf is a multi award-winning actress for her stage, TV and film work, having won a Tony Award, three Primetime Emmy Awards, and an Academy Award nomination.

The great-great-niece of screenwriter, poet, and Pulitzer Prize-winning playwright Zoe Akins, Laurie earned a bachelor of arts in theater in 1977. Beginning her career on the stage, Laurie and her ex-husband, Jeff Perry, were founding members of Chicago's Steppenwolf Theater company.

She made her feature film debut playing the role of Leslie Glass in Desperately Seeking Susan (1985), and by 1988 was a regular on the TV sitcom Roseanne, winning three consecutive Primetime Emmys for her role as Jackie Harris in 1992, 1993 and 1994.

In the 1991 Oscar-winning feature film JFK, Laurie played Susie Cox and over the years, she has played roles in many critically acclaimed features. She also provides the voice of Andy's Mom in the Toy Story movies.

However, it was her role as Marion McPherson, the mother of an awkward teenage girl (played by Saoirse Ronan) in Lady Bird (2017) that has earned her the most acclaim to date. In addition to Academy Award and Golden Globe nominations, she has also won multiple Film Critics Society Awards for her work in the film. Also in 2017, she won a Tony Award for her role in A Doll's House, Part 2.

Laurie has a daughter, Zoe Perry, with her first husband, Jeff Perry and three children with her second husband, Matt Roth. Unfortunately, her second marriage ended in divorce in 2014 after nine years.

As of February 2018, Laurie can be found onstage in Edward Albee's play Three Tall Women opposite Glenda Jackson on Broadway at the Golden Theatre.