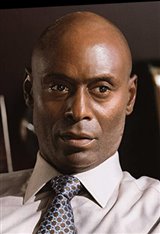 Lance Reddick is an American actor, appearing in film, and television. He is best known for his role as Cedric Daniels on The Wire, and as Charon in the John Wick franchise. Reddick has also taken his talents to video games, voice acting in the video game franchise Destiny as Commander Zavala.

Lance quickly made a name for himself by showcasing his talents through diverse and complex characters on respected television shows. He has a plethora of guest appearances and recurring roles on television, appearing on shows such as CSI: Miami and Lost.

His most recognizable television role is as Cedric Daniels, a police officer on the popular HBO series The Wire from 2002 to 2008. This led to more lead role opportunities. He played lead roles on Fringe and Bosch, both of which earned him Saturn Award nominations in 2016 for Bosch, and 2011 and 2013 nominations for Fringe.

If you don't recognize Lance from his work on television, then you most likely know him as Charon, the concierge at the Continental Hotel in the John Wick franchise.

His versatility as an actor opens up many doors to roles for him, bringing his best work in both a lead and supporting roles.

In 2011, Lance married Stephanie Day. He has two children from his first marriage to Suzanne Yvonne Louis. ~Sean Olegario