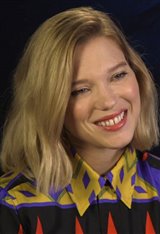 Léa Seydoux was born in Paris, France to a showbusiness family. Her grandfather is Jérôme Seydoux, the boss of Pathé studios, while she is the grand-niece of the CEO of the Gaumont company.

A shy teenager, she took acting lessons outside of school. She was cast in the music video "Ne partons pas fâchés" by singer Raphaël in 2005 before launching her film career with a substantial role in the comedy Mes copines (2006).

After bringing her touch to productions from her native country, she was directed by Quentin Tarantino for the explosive film Inglourious Basterds (2009), alongside Brad Pitt and Christoph Walt. Then, she became Isabelle of Angoulême in Ridley Scott's adventure Robin Hood (2010), this time alongside Russell Crowe and Cate Blanchett.

She worked with Woody Allen orders on the romance Midnight in Paris (2011) and played a supporting role alongside Tom Cruise in Mission : Impossible - Ghost Protocol (2011).

She has also had much success in France. Her solid performance in the feature film Les adieux à la reine/Farewell to the Queen (2012) was hailed with a César nomination, in the Best Actress category.

In 2013, Léa Seydoux enjoyed visibility at the Cannes Film Festival. She received much attention due to the excellence of her acting in the controversial work La vie d'Adèle/Blue is the Warmest Color, in which she shared daring scenes with Adèle Exarchopoulos. The two women shared the Palme d'Or with Abdellatif Kechiche, the first time the prize was ever officially awarded to two actors in addition to the director.

She transformed into a "Bond Girl" alongside Daniel Craig in the James Bond adventure Spectre (2015). The $245 million blockbuster almost reached $900 million in box office sales worldwide. She agreed to reprise her character, Madeleine, when the 25th adventure of the famous secret agent, No Time to Die (2020) took place.

Between the two, she was lured by the screenplay for the film by Quebecer Xavier Dolan: It's Only the End of the World (2016). The film also featured a number of other French stars, including Marion Cotillard, Nathalie Baye, Vincent Cassel and Gaspard Ulliel.

Léa Seydoux has been in a relationship with German actor André Meyer since 2013. They welcomed their son George in 2017.