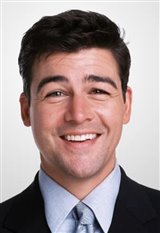 Despite his movie star good looks and his onscreen charm, Kyle Chandler has found his success mostly on the small screen. Born in Buffalo, New York, his family moved to the small town of Loganville, Georgia when he was small.

There wasn't much to do in Loganville (pop. 4200), so Kyle watched old black-and-white movies on the only TV station they could receive and acted out the roles afterwards. While studying drama at the University of Georgia, he was spotted by a talent scout and upon graduation, moved to Los Angeles where he worked at the Museum of Natural History selling toy dinosaurs as the roles slowly began to filter in.

His first onscreen appearances were small roles in the TV movies Quiet Victory: The Charlie Wedemeyer Story (1988) starring Pam Dawber and Michael Nouri, and Unconquered (1989) starring Dermot Mulroney and Peter Coyote. Chandler played a supporting role in Home Fires Burning (1989) starring Barnard Hughes and Bill Pullman and made guest appearances on China Beach and Freddy's Nightmares before becoming a regular on the already established TV series Tour of Duty in 1990.

When the show ended, he was immediately picked up to play Jeff Metcalf in a new series, Homefront. As part of an ensemble cast, he garnered quite a bit of attention and found himself more in demand.

During a break from the show, Chandler made his film debut as an aspiring country singer in Pure Country (1992) starring George Strait. After Homefront ended, he won a able role in The Color of Evening (1994) starring Ellen Burstyn, but the film was never released to theaters.

He then played a lead in the mini-series Heaven & Hell: North & South, Book III (1994), followed by starring roles in the TV movies Sleep, Baby, Sleep opposite Tracey Gold and Convict Cowboy (1995) with Jon Voight. Despite Chandler's boy scout good looks, in the latter he played a tough ex-con who is assigned to work with horses during his stint in prison.

After a small role in the major motion picture Mulholland Falls (1996), Kyle was cast as the lead on the TV series Early Edition. As a good-hearted young man who turns reluctant hero when he gets tomorrow's news today, Chandler came to the attention of many more TV viewers and earned himself even more fans than he'd had with his first series. He was also honored with a Saturn Award for his work in the show. When the series ended its run after four seasons, Chandler immediately found work in the unfunny sitcom What About Joan (2001), which luckily didn't last long.

Kyle didn't have any more luck when he was miscast in a supporting role in the new Fox TV series The Lyon's Den starring Rob Lowe. The series was cancelled after several episodes, but Kyle's career thankfully didn't suffer. He found another hit when he was cast as the coach in the TV series version of Friday Night Lights, for which he won a Primetime Emmy in 2011.

Kyle played a pivotal role in the critically acclaimed drama Manchester by the Sea (2016) with Casey Affleck and Michelle Williams. Most recently, he played Brooks in the comedy Game Night (2018) and the detective in the mystery The Vanishing of Sidney Hall (2018). That same year he appeared in the biographical drama First Man (2018) alongside Ryan Gosling and Claire Foy. He is set to appear in the upcoming action-adventure film Godzilla: King of the Monsters (2019) with Millie Bobby Brown.

Kyle lives in Los Angeles with his wife, writer Kathryn Chandler and their two daughters.