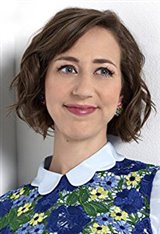 Comedian and actress Kristen Schaal was born in Longmont, Colorado and raised on her family’s cattle ranch near Boulder. She began performing at age 15, acting in plays and working with a community-service improv group called Break the Cycle.

After one year at the University of Colorado, she transferred to Northwestern but was told the theater program was full. Despite this, Kristen sat in on an acting class and waited for the instructor to let her participate, despite her lack of enrollment. Eventually, at the end of the semester, the instructor relented and Kristen was allowed to sign up for acting classes.

Not satisfied enough with day classes, Kristen would ride the train into Chicago every night and take improv classes at the Second City conservatory. After graduation, Kristen and nine other Northwestern students traveled to New York City for a two day showcase. This lead to Kristen landing a theatrical agent, a commercial agent, and a manager.

While awaiting roles, she waited tables at the Planet Hollywood in Times Square and began to turn to stand-up comedy to keep herself busy. Eventually, she earned her own weekly variety show with Kurt Braunohler. Kristen cites legendary comedian Andy Kaufman as a major influence on her comedy.

While appearing on television series such as How I Met Your Mother and Law & Order: Special Victims Unit, Kristen's big break in acting came when she was cast as Mel on the HBO series Flight of the Conchords from 2007 to 2009. The show ran for two seasons and successfully earned her a place in the world of acting.

Some of Kristen's most notable roles to date include her recurring character Louise on Bob's Burgers and her role as Carol Pilbasian on The Last Man on Earth.

Kristen returned to the big screen in the road trip comedy Boundaries (2018). She reprised her role as the voice of the dinosaur toy Trixie in Toy Story 4 (2019) and then played Kelly in the long-awaited sequel, Bill & Ted Face the Music (2020) alongside Keanu Reeves.

In 2012, Kristen married Daily Show staff writer Rich Blomquist, with whom she has a daughter named Ruby.