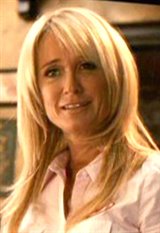 Kim Richards was once one of the busiest and best-known child actors in Hollywood. She was already a showbiz veteran with 20 commercials under her belt when she was cast at age five in 1970 as youngest daughter Prudence on the ABC-TV sitcom Nanny and the Professor, a family show that was an instant hit, enjoying a three-year run.

A role in the Disney TV movie The Strange Monster of Strawberry Cove (1971) followed and Kim didn't stop working until she was in her late teens. She made guest appearances on popular series such as The F.B.I., Emergency!, Little House on the Prairie, Family, The Streets of San Francisco, Medical Story, Medical Center, Police Woman and The Rockford Files, all before the age of 12.

By age eight, just after Nanny and the Professor came to an end, she was cast in another recurring role in a sitcom, this one called Here We Go Again for the ABC-TV network. At nine, she made her first starring appearance in a Disney production, the TV movie The Whiz Kid and the Mystery at Riverton (1974), playing Daphney "Daffy" Fernald. She would reprise the role in the 1976 TV movie The Whiz Kid and the Carnival Caper. In between, Kim also starred in the Disney TV movie Return of the Big Cat (1974) and in the Disney motion picture Escape to Witch Mountain (1975), in which she played Tia, who, along with her brother Tony (played by another popular child actor of the 1970s, Ike Eisenmann), were orphaned but who both had strange powers such as telepathy. The movie released in theaters and was such a big hit that a sequel was filmed, titled Return from Witch Mountain (1978). Other Disney productions included the TV movie Return of the Big Cat (1974) and the theatrical release No Deposit, No Return (1976).

Kim was also a regular in magazines aimed at kids and teens, posing for posters and giving interviews. In one of these, she complained that as a young actor, she was barely given time for a bathroom break, saying that the crew would pound on the bathroom door to tell her to get back to work. It was obvious that the stress of constantly working was getting to the young girl.

In 1977, she cast in a starring role in the TV movie James at 15 alongside Lance Kerwin, who was another popular kid actor of the time. The movie was turned into the TV series James at 16, which ran from 1977 to 1978. In 1979 Kim was cast in yet another sitcom, Hello Larry, as Ruthie Adler. The series enjoyed two seasons on the NBC-TV network.

Guest appearances continued on popular series such as Alice, CHiPs, The Love Boat, Magnum P.I. and The Dukes of Hazzard, with Kim proving, as always, that she was equally talented at comedy and drama.

Her younger sister, Kyle Richards, followed in Kim's footsteps and the two played sisters in the horror movie The Car (1977), with James Brolin as their protective father. Although Kyle made a number of guest appearances on TV series of the day, and even had a recurring role on Little House on the Prairie, her star never rose to the heights that Kim's had. Their older sister Kathy had even less success, beginning with a small role in an episode of Nanny and the Professor and three more guest appearances on TV series over the next year before taking a six-year break, then appearing in a handful of roles in the late 1970s before marrying Hilton Hotel heir Rick Hilton in 1979 and giving birth to four children, including Paris Hilton.

In 1985, Kim filmed a role in the low budget movie Tuff Turf, playing against type as the girlfriend of a gang leader. The movie was a bomb both with critics and the public, and Kim's prolific career finally came to a stall at the age of 19.

In 1985 Kim married G. Monty Brinson, the heir to a supermarket franchise, but the marriage ended in divorce just three years later, although first Kim starred in a 1989 movie titled Escape that was based on a story Brinson wrote and co-produced with Kim. Now the mother of a young daughter, Kim quickly married Gregg Davis, the son of billionaire oil and entertainment mogul Marvin Davis, in 1989. Unfortunately, that marriage ended after only two years (and two more children). Kim's youngest daughter, whose father is her ex-boyfriend John Jackson, was born in 1995.

Kim returned to the big screen years later with a role as Cristina Ricci's mother in Black Snake Moan (2006) and with a small but pivotal role in the Disney reboot movie Race to Witch Mountain (2009), but since 2010 she's been better known for appearing on the reality TV series The Real Housewives of Beverly Hills, alongside Kyle. Not surprisingly, having worked her entire childhood, Kim has struggled with alcohol and drug addiction throughout her adult life and as of 2017, no longer appears on the reality show due to the stress.

In April 2015, Kim was arrested for public intoxication at the Polo Lounge inside the Beverly Hills Hotel. Later that month, she appeared on Dr. Phil with three of her children to discuss her addictions, but stormed off the set. In August 2015, she was again arrested, this time for shoplifting at a Target store.

Kim has been in and out of rehab over the years, but in 2017 seemed to be on the right track, when she announced that thanks to a horse rescue sanctuary, she was sober and helping the horses, telling E!News: "The horses make me feel so good. I feel like I’m a part of something so huge and I know I’m making a difference. The Sanctuary keeps me grounded and keeps me at peace and it’s healthy for me."