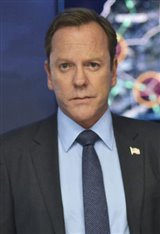 "Acting is one of the most humiliating professions one can have...Actors take chances with themselves, with their personalities, and with standing alone in a room with a hundred people watching.."

Born in London, England, while his father, actor Donald Sutherland, was working in British films and TV, Kiefer, his twin sister Rachel and half brother Tom moved to Toronto with their mother, actress Shirley Douglas, when he was ten. As Sutherland morosely plodded his way through a series of boarding schools, he found himself happiest while attending theater classes.

His first film was Max Dugan Returns (1983) in which he shared a scene with his dad. In 1984, the 18-year-old won a Genie Award for his portrayal of Depression-era adolescent Donald Campbell in The Bay Boy.

After making his American TV debut on a 1985 episode of Amazing Stories, Sutherland's career went into full drive and hasn't stopped since. In the tradition of his versatile father, he has played anything and everything, from bullies to druggies to zealots to gunslingers to button-down conservatives.

It was the feature Stand by Me (1986) that introduced Sutherland on an international scale. Sutherland recalls arguing with director Rob Reiner during the audition. "Let me try it my way first and then I'll try it your way." Reiner did something he has only ever done twice in his career: he gave Sutherland the job on the spot. The film, in which Kiefer plays a small town bully, received numerous awards and nominations.

Sutherland took advantage of his newfound fame and continued to play bad boy characters in blockbuster films such as The Lost Boys (1987) and Young Guns (1988). He became associated with the "brat pack"—a well-known, frequently seen group of actors in the '80s including Judd Nelson, Emilio Estevez and Charlie Sheen.

During the '90s, Sutherland fell out of the Hollywood spotlight, but gave strong performances in films such as Flatliners (1990), The Three Musketeers (1993), The Vanishing (1993), The Cowboy Way (1994) and Dark City (1998). In 1997, he took time off from film work and appeared with his mother in a stage production of The Glass Menagerie. "I love film, but if you want to get down to the basic rudimentary structure of acting and how to develop a character and how to be flexible with that character, you have to do theater."

Preferring to keep a low public profile and to let his work speak for him, Sutherland added directing to his artistic accomplishments with the superb 1993 death-row drama The Last Light. About directing he states, "I couldn't direct a film like Dark City. I don't have the kind of vision that Alex or Spielberg have. The things I like to make are very character-driven pieces. Ordinary People—that's a film I'd have liked to make." He has continued to direct films adding 1997's Truth and Consequences, N.M., and the 1999 drama, Women Wanted (starring himself, and including his mother in the cast), to his resumé. He later starred in Pompeii (2014), Twin Peaks: The Missing Pieces (2014) and Forsaken (2015). His latest credits include roles in Zoolander 2 (2016) and a reprisal in the remake of his film Flatliners (2017).

Previously married to actress Camilla Kath, Sutherland found himself a reluctant tabloid target in 1990 when he announced his engagement to his Flatliners co-star Julia Roberts. When Roberts abruptly and without explanation broke off the engagement, Sutherland was subjected to yet another unwelcome round of banner headlines. In 1996, he married Kelly Winn, but the two separated in 1999 and finally were granted a divorce in 2008. He has one daughter, Sarah Jude, from his first marriage.

In 2001, Sutherland found himself starring in the wildly popular drama Fox-TV series 24. He has won a Golden Globe, an Emmy, two Screen Actors Guild Awards and two Golden Satellite Awards for his role as Jack Bauer in the show. He continued to take film roles while on hiatus from his show, which ended in 2010.