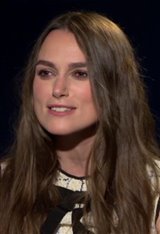 The daughter of actor Will Knightley and actress-turned-playwright Sharman Macdonald, Keira Knightley was born in London, England. She followed in her parents' footsteps quite early, making her film debut at the age of nine in A Village Affair (1994). By 1999 she appeared in her first Hollywood blockbuster, playing Padmé's double Sabé, in Star Wars: Episode I - The Phantom Menace (1999).

In the TV movie The Princess of Thieves (2001), Keira played the title role of Robin Hood's daughter Gwyn, who takes on the family business after her father dies. Despite her lack of soccer experience, she was chosen for a lead role in the independent feature Bend It Like Beckham (2002). Along with Parminder Nagra, who played the lead role in the film, Keira trained full time with a coach for three months in order to successfully play a soccer-obsessed teenager. They learned Futebol de Salao—the Brazilian method of playing soccer and repeated the tricky moves over and over, even practising them at home each night. At one point, when Keira sustained a concussion, the director suggested that they use doubles, but the girls refused, saying they wanted to do the soccer action themselves.

When Bend it Like Beckham was number one in Britain and stayed there for several weeks, it was clear that the film was a hit. It spread its wings across Europe, then was shown in Australia, India and eventually opened in the United States to rave reviews. For her role, Keira won the ALFS Award for British Newcomer of the Year from the London Critics Circle Film Awards, as well as tying with Nagra for the Best Actress award at the Bordeaux International Festival of Women in Cinema.

Soon after, Keira landed a lead role in the Hollywood blockbuster Pirates of the Caribbean: The Curse of the Black Pearl (2003) acting alongside Johnny Depp and Orlando Bloom, for which she won two Teen Choice Awards and an IFTA Award for Best International Actress. She then took on a role in Love Actually (2003) with Hugh Grant and Liam Neeson.

Currently one of Hollywood's most sought-after young actresses, she has received Golden Globe nominations for her performances in Atonement (2007), Pride & Prejudice (2005) (for which she also received her first Oscar nomination) and most recently, The Imitation Game (2014).

The critical acclaim keeps coming in for Keira, who won an Empire Award for her work in Atonement. Also in 2008, she won a People's Choice award for Favorite Female Action Star. In 2010, Keira was nominated for a British Independent Film Award for Best Supporting Actress in Never Let Me Go. She continues to take on a wide range of roles, like mental patient Sabina Spielrein in A Dangerous Method with Viggo Mortensen and Michael Fassbender, and a young woman struggling with the end of time in Seeking a Friend for the End of the World (2012) alongside Steve Carell. She also teamed up with her Pride & Prejudice director, Joe Wright, for the film adaptation of another classic novel, Leo Tolstoy's Anna Karenina (2012). In 2014, she starred in Laggies (2014) and The Imitation Game (2014), receiving her second Academy Award nomination for her supporting role in the latter film.

The English actress starred alongside Jake Gyllenhaal and Jason Clarke in the true-story drama Everest (2015), and also appeared in the drama Collateral Beauty (2016) alongside Will Smith. A year later she reprised her popular role as Elizabeth Swan for a cameo appearance in the film Pirates of the Caribbean: Dead Men Tell No Tales (2017).

Most recently, Keira returned to theaters in the drama Colette (2018) as Gabrielle, a woman whose husband, a writer guilty of plagerizing, takes credit for her own writing once she becomes succesful. She also played Sugar Plum in Disney's fantasy film The Nutcracker and the Four Realms (2018).

Having been linked in the past to actors Rupert Friend and Jamie Dornan, she began dating singer Jamie Righton in February 2011. The couple were married May 4, 2013. Together, they have a daughter named Edie, who was born in May 2015.