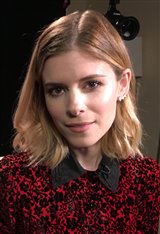 As the great-granddaughter of Timothy Mara, the founder of the New York Giants, Kate Mara has never been a stranger to the spotlight, singing the national anthem at various Giants home games since she was a young girl.

Born and raised in Bedford, New York, Kate graduated from high school a year early and was accepted at NYU, but postponed university in order to focus on her passion for acting and singing, which she had from a young age. After seeing the stage production Les Misérables she said she "fell in love with Broadway and musicals."

Kate acted in several plays before beginning her venture into film. Her first big screen role was in Joe the King, closely followed by an appearance in Sydney Pollack's Random Hearts, both released in 1999. Following these initial film appearances, Kate was a regular on several television shows including Nip/Tuck, Jack & Bobby, Entourage, American Horror Story and most recently, House of Cards.

Kate balances acting in both television and movies, appearing in popular films such as Brokeback Mountain (2005), 127 Hours (2010) and Deadfall (2012). She also starred in Transcendence (2014) alongside Johnny Depp, and in Fantastic Four alongside Miles Teller. More recently, she starred in the space drama The Martian (2015), the sci-fi thriller Morgan (2016), the post-apocalyptic war drama Man Down (2016). In the biopic Megan Leavey (2017), she played the title role — a young woman who joins the Marines and when she's assigned to the bomb squad with a canine partner, she bonds with him. She next starred in another biopic — Chappaquiddick (2018), playing Mary Jo Kopechne, who was in a car with senator Ted Kennedy when he drove it off a bridge and then left her to drown.

Kate, who married fellow actor Jamie Bell in July 2017, has a younger sister, Rooney Mara, who is also a successful actress. The two Mara sisters, who are both vegans, have campaigned successfully to get more humane conditions for chimpanzees in Liberia.