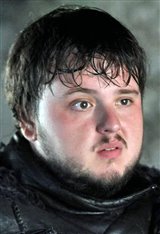 John Bradley is an English actor best known for his work on the hit HBO series Game of Thrones.

John was born in Manchester, England, where he attended St Paul's Roman Catholic High School. In 2005, John began attending Loreto College where he studied Drama and Theater Studies. After graduating from Loreto in 2005, John went on to study at the Manchester School of Theatre, graduating in 2010, with a Bachelor of Arts degree in acting.

John got his big break just three months after graduating when he auditioned for the part of Samwell Tarly on Game of Thrones (2011-2019). He won the role and became a part of the main cast of the show for all eight seasons. He shares multiple awards and nominations with his castmates for their work on the show, including an award for IGN People's Choice Award for Best Ensemble and a nomination for a Screen Actors Guild Award for Outstanding Performance by an Ensemble in a Drama Series.

John made his big screen debut in 2012 in the film Anna Karenina (2012), playing an Austrian Prince.

In 2016, John appeared in the role of Roy in the short film Roger (2016). His portrayal earned him a Zeus Award for Best Actor, as well as a Southampton International Film Festival award nomination for Leading Actor in a Short.

Aside from acting, John enjoys playing the drums. "[Playing the drums] has been a solitary pursuit," he told Bustle magazine, "it’s not something that I shared with people before because I just thought I get so much enjoyment out of playing my drums, so much enjoyment out of my own private study of music and trying to get better at the drums that if I had started to introduce that into my professional life, then I’d lose some of the enjoyment of it."

He is also a big fan of Manchester United.

John is currently in a relationship with entertainment writer Rebecca April May. The two have been dating since 2017. ~Sean Olegario