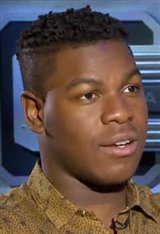 Born in London, England, John Boyega is the son of Nigerian parents. After appearing in a school play, he joined a theatre school for children aged nine to 14. He later studied performing arts at South Thames College and the Identity School of Acting.

After acting in plays onstage at the National Theatre and the Tricycle Theatre in London, he landed his first movie role in the Film 4 production Attack the Block. His work in the film earned him a Black Reel for Best Actor at the 2012 Black Reel Awards, as well as nominations from several other organizations, including Most Promising Newcomer at the British Independent Films Awards and the London Critics Circle Film Awards.

From there, John landed a recurring role on the BBC series Becoming Human and made a guest appearance on Law & Order: UK. He also appeared in several TV movies and an independent feature (Junkhearts, which was never released to theaters), before being cast as the lovable houseboy Ugwu alongside Chiwetel Ejiofor and Thandie Newton in the feature film Half of a Yellow Sun (2012).

John played the starring role in Imperial Dreams (2014), playing a young gangster. The film won numerous awards at a variety of film festivals.

When John was cast in a starring role as Finn in the new Star Wars movie, Star Wars: The Force Awakens in April 2014, his life would change forever.

He has since voiced a character in the animated Major Lazer series and appeared alongside Emma Watson in the thriller The Circle (2017) and starred in the latest Star Wars films, Star Wars: The Last Jedi (2017) and Star Wars: The Rise of Skywalker (2019). John also played a starring role in Pacific Rim Uprising (2018) alongside Scott Eastwood.

He has his own production company, UpperRoom Entertainment Limited, which he founded in January 2016.