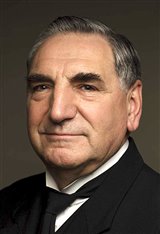 However, before he became known to audiences around the world as Carson, he was familiar to the British public from his roles in numerous TV shows and movies.

He first studied law at the University of Sussex, where he was quickly bitten by the acting bug when he took part in a play. He dropped out of university after only two years and joined a theatre group.

As a working actor, he appeared in countless plays, appearing in London and even touring America at one point.

His TV debut came in 1980, when he appeared on two episodes of the ITV series, Fox. His feature film debut was the same year, with a small role in the superhero movie Flash Gordon (1980), starring Sam J. Jones. His second film role was in the hit comedy Top Secret! (1984) starring Val Kilmer.

Notable roles over the next few years include Mr. Marlow on the 1986 TV mini-series The Singing Detective, the starring role of Richard Murray on the limited BBC drama series A Sense of Guilt in 1990, Ralph Bashford in Shakespeare in Love (1998), Detective Armstrong in 102 Dalmations (2000) and Nish in Ella Enchanted (2004).

However, it wasn't until he landed the role of Charles Carson on ITV's Downton Abbey that he gained critical acclaim. He received four Primetime Emmy award nominations for the role over the course of the show's six season run, as well as three shared Screen Actors Guild awards with the rest of the cast.

He reprised his role in the feature film Downtown Abbey (2019).

In his spare time, Jim enjoys cricket and is chairman of Hampstead Cricket Club. He also enjoys cycling and participates in numerous rides for charity.

Jim has been married to actress Imelda Staunton since 1983 and they have one daughter together, born in 1993.