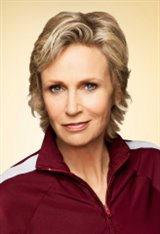 Illinois-born Jane Marie Lynch spent 15 years in Chicago acting at the Steppenwolf Theatre Company. She continued to pursue theater, playing the role of Carol Brady at Annoyance Theater, in their rendition of The Real Live Brady Bunch.

In 2005, audiences and critics took notice as Lynch portrayed Paula in the film The 40-Year-Old Virgin. The role was originally intended for a man, but after much pushing by Steve Carell’s wife, the role was offered to her.

Since then Lynch has been seen on the big and small screen. In 2008 she was featured in the direct-to-DVD movie Another Cinderella Story starring Selena Gomez. The film was a spin-off from the popular feature A Cinderella Story (2004) starring Hilary Duff. In 2010, she voiced the role of Gretchen in the third installment of the Shrek films, Shrek Forever After, starring Mike Myers, Eddie Murphy and Cameron Diaz. The film had mixed reviews but stayed at No. 1 for three weeks in Canada and the U.S., grossing over $752 million worldwide.

Along with her film roles Jane has been known for her recurring roles in several popular television shows. She was featured in 13 episodes of Two and a Half Man playing a therapist for Charlie Sheen’s character, Charlie Harper. She was also featured in The L Word, Criminal Minds and Family Guy.

Even with her extensive movie career and television roles, Lynch is best known for her role as Sue Sylvester on the Fox musical comedy series Glee. She has won numerous awards for her portrayal of the humorous and determined cheerleading coach, including a 2010 Emmy Award for Outstanding Supporting Actress in a Comedy Series. She also won a 2010 Golden Globe Award for Best Supporting Actress - Series.

She lent her voice to the animated feature Rio (2011), about a bird trying to find his way home, Paul, about an alien encounter and The Three Stooges (2012), a comedy act made into a movie about three friends, and the computer-animated film Wreck-It Ralph (2012), about an arcade villain who rebels against his role and dreams about becoming a hero.

After a three-year haitus, she returned in the comedy The Late Bloomer (2016). More recently, she returned to voice the role of Sergeant Calhoun in the Wreck-It-Ralph sequel, Ralph Breaks the Internet (2018).

Jane is open about her lesbianism and in 2005 was named POWER UP’s “10 Amazing Gay Women in Showbiz.” She is dovorced from clinical psychologist Laura Embry after a marriage that lasted four years.