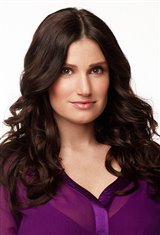 Born in Syosset, New York, Idina Menzel is an American actress, singer and songwriter. She is well known for her role as Elsa in the animated film Frozen.

While in the 5th grade, she played Dorothy in her school’s production of The Wizard of Oz. It is there where she learned of her passion for performing for an audience.

Growing up, Idina sang professionally at various functions. She would later go on to graduate from the renowned Tisch School of the Arts in New York City.

“The kids at school were having keg parties on the weekends, and I was doing a wedding or a bar mitzvah in some temple on Long Island,” Idina said during a roundtable interview for Frozen. “I came into my own, and built confidence as a performer. I did that through having to stand up with people who weren’t paying much attention.”

Idina’s big break came with her role of Elsa in Disney’s box office hit Frozen, and singing the multi-platinum song “Let It Go.” She would make history as the first person with both a hit on Billboard’s Top 10, and a Tony Award (for her starring role on Broadway in the musical Wicked in 2004.

Before her movie breakthrough with Frozen, Idina made appearances in several different films such as Disney’s Enchanted (2007), and the film adaptation of Rent (2005).

The actress also appeared as Shelby Corcoran, a vocal coach on several episodes of the hit TV series Glee from 2010-2013. She got the role after fans noticed how similar she looked to Rachel Berry, played by Lea Michele. Idina reached out to the show’s producers, offering to play Rachel’s mom and got the role.

Idina has performed on many different TV specials including the Academy awards where she won Best Song. She gained much attention that night, after social media went into a frenzy over John Travolta pronouncing her name wrong. She also sang the National Anthem at Super Bowl XLIX.

In 2019, Idina reprised her role in the hit sequel Frozen II, lending her voice to the character of Elsa.

Idina married actor Taye Diggs in January of 2003 and they had a son together named Walker. The two met as members of the original Broadway musical Rent in 1995. They also had recurring roles together in the T.V. series Private Practice. The couple would eventually get a divorce in 2013.

In September 2016, she announced her engagement on Twitter to actor Aaron Lohr. Similar to her previous marriage, the two met while working on the musical Rent.

Idina is also involved in numerous charities, including one she founded in 2010 called A BroaderWay. According to her website, the foundation is "dedicated to offering girls from underprivileged communities an outlet for self-expression, and creativity through arts-centered programs.” In 2015, she was honored at the Make a Difference Day Awards for all of her work she’s done with the organization. ~Brenden Zerihun