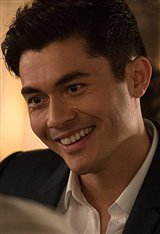 Malaysian actor Henry Golding was born in Betong, Malaysia to an English father and Malaysian mother. He lived in Terengganu for the first eight years of his life before his family moved to Surrey, England. He didn't attend college after finishing high school and instead worked as a hairdresser in London. He eventually relocated to Kuala Lumpur when he was 21 years old.

Henry did not get his start on television as an actor, but instead as a presenter and travel host. He worked for the BBC and Discovery Channel on such shows as Welcome to the Railworld Malaysia and its follow up, Welcome to the Railworld Japan. As part of his travels, Golding documented his bejalai, a rite of passage into manhood as part of his mother’s ancestral Malaysian tribe, Iban. Following the two-month experience through Borneo, which he filmed himself, Henry finished with a traditional hand-tapped bejalai tattoo on his right thigh.

While he has had a few small parts in Malaysian films such as Pisau Cukur (2009), Henry's breakthrough role came when he was cast as the handsome and fabulously rich heir to a Singapore fortune in the box office hit film Crazy Rich Asians (2018).

Some called this casting another instance of white-washing in Hollywood, because of Golding’s half-British, half-Malaysian descent, something which he has said he struggled with himself throughout his life: “The one thing that I learned very young was to own my identity. And I knew, I’m Asian through and through. There’s nothing I need to prove.”

Henry is married to Italian-Taiwanese TV personality Liv Lo and the two live in Singapore. They are good friends with Golding’s Crazy Rich Asians (2018) co-star Harry Shum Jr. and his wife Shelby Rabara.

Also in 2018, Henry appeared in the neo-noir thriller A Simple Favor (2018) alongside Anna Kendrick and Blake Lively. In 2019 he returned to the big screen in the British film Monsoon (2019), as well as the romantic comedy Last Christmas (2019), co-starring alongside Emilia Clarke.

For Henry, 2020 looks to be a big year, with starring roles in films such as Guy Ritchie's The Gentlemen alongside Matthew McConaughey; and the title role in the G.I. Joe spin-off, Snake Eyes (2020).