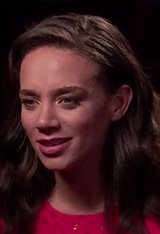 Hannah John-Kamen was born in Anlaby, East Yorkshire, England to a Norwegian fashion model and Nigerian forensic psychologist. She is known for her role as Ornela in the hit HBO series Game of Thrones. She has two older siblings and trained at the National Youth Theatre in London.

Her television career began in 2011 when she appeared on the series Misfits. Hannah plays the piano and is trained in ballet, cabaret, jazz dance, salsa and tap dance. Following supporting roles in Tomb Raider (2018) and Ready Player One (2018), she landed a starring role as Ava/Ghost in Ant-Man and The Wasp (2018).