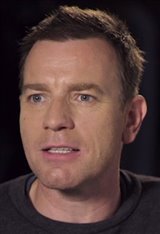 He doesn't dig Hollywood. But Hollywood is sure digging him. The current walking embodiment of U.K. cool, Scottish-born Ewan McGregor is one of the hottest actors in Tinseltown.

Young Ewan got into acting because his uncle, Dennis Lawson, was making money at it—Uncle Dennis even had a role in Star Wars. Ewan left home to study acting at 16, first at the Perth Repertory Company then in London at the Guildhall School of Music and Drama.

His first movie job was the role of Alvarez in Bill Forsyth's quirky 1993 comedy/drama, Being Human, with Robin Williams. The movie—and Ewan—were quickly forgotten. Then, in 1994, he met a director/producer/writer trio that would really launch his career. Danny Boyle, Andrew MacDonald and John Hodge cast him in Shallow Grave, a macabre thriller about three Edinburgh flatmates who find their new boarder dead... and dispose of the body to keep the suitcase full of loot that he moved in with.

The threesome—now a quartet including Ewan—reunited in 1996 for a screen version of Irvine Welsh's harrowing novel about heroin use, Trainspotting. The film was an enormous success in Britain and abroad. Ewan, in particular, made a "splash" as Renton, literally diving into the toilet at one point to reclaim his flushed stash.

Ewan appeared in Emma (1996) with Gwyneth Paltrow, Peter Greenaway's The Pillow Book (1996) and Brassed Off (1996) before the Trainspotting team reunited a third time for A Life Less Ordinary (1997), their first American film. The film flopped, but it wasn't Ewan's fault—and Hollywood knows it.

And the kid who got into acting because his uncle was making money at it, well, he continued in his uncle's footsteps by signing to play young Obi Wan Kenobi in George Lucas' long-awaited Star Wars prequel. Said Ewan: "The Star Wars movies are way beyond studio pictures. They're enormous. I can't say no."

Ewan has won numerous honors during his career, including an MTV Movie award, two British Actor of the Year awards (1997, 2002) from the London Critics Circle Film Awards, Actor of the Year at the 2001 Hollywood Film Festival, a 2002 Golden Satellite Award, Entertainment Personality at the 2002 British Independent Film Awards, two Scottish BAFTAs, four Empire Awards and a Golden Globe nomination.

Although he's done plenty of full frontal nudity in his films, in 2011, just before his 40th birthday, Ewan told the UK paper The Express that he wouldn't do anymore, calling nude scenes "terribly exposing" and "rarely of any use."

Ewan's latest credits include T2: Trainspotting (2017), the live-action Disney adaptation of Beauty and the Beast (2017) and also for Disney, the title role in the drama Christopher Robin (2018).

He made his directorial debut with the 2016 film American Pastoral, in which he also acted. His latest starring role is in Doctor Sleep (2019), the sequel to 1980 classic horror film The Shining, playing the role of a now grown up Dan Torrance.

In 2020, he starred as the antagonist Black Mask in Birds of Prey (And the Fantabulous Emancipation of One Harley Quinn), alongside Margot Robbie.

For his role as Emmit Stussy on the FX Network's TV series Fargo, Ewan won a 2018 Golden Globe. He thanked both his wife, Eve Mavrakis, the mother of his four children, and his girlfriend/co-star, Mary Elizabeth Winstead. Ewan and Eve have been separated since May 2017.