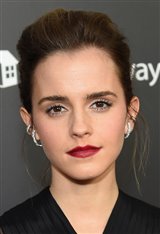 Prior to landing the role of Hermione Granger in the Harry Potter films, Emma Charlotte Duerre Watson had only appeared in school plays. She had also taken first place in a school poetry recital at age seven, but had never acted professionally. Emma was up against stiff competition for the much-coveted role, as literally thousands of young actresses, many with much more experience, auditioned for the part. After 11 auditions, she finally won the role.

Now that she has experienced working in a film, Emma would like to appear in other roles as well. She said in an interview, "I'd like to play some American high school girl. I want to play something totally different. I want to play every kind of character and every point of view, but I'm probably going to be playing Hermione for a while."

Emma admits to having been a Harry Potter fan before landing the role. Signed to play bossy Hermione (Her-my-own-nee) in the first three films, she expressed interest in continuing on in more. However, when asked about kissing her co-stars in future films at the time, she replied, "Oh my God, no, no chance, no chance. That's not in my contract!" However, she finds kissing toads not quite as disgusting as kissing boys, as she revealed that when she had to do a scene in the first film where a boy asks her, "Do you want to kiss Trevor goodnight," meaning his toad, she was supposed to give him a scornful look, but kept bursting into laughter.

Proving that she's just as feisty as her character, she told a reporter who asked her if she always wore pigtails, "I never wear pigtails, I wear PLAITS."

Emma's lawyer parents are divorced, and she and her younger brother Alex grew up with their mother and their two cats, Bubbles and Domino. She enjoyed playing field hockey and tennis and excelled at school, getting all As in her GSCE exams (taken during the last year of high school).

After graduation, she studied for two years at Brown University in Providence, Rhode Island, but will be attending another school in Fall 2011. She completed the final Harry Potter film—Harry Potter and the Deathly Hallows—during school breaks and once filming was wrapped, she cut off her hair, which she'd been unable to do for continuity purposes. She and the rest of the cast were also not allowed to get tans for the same reason, so she's been enjoying the sun.

Since then, she's begun her career in so-called "grown up" films, including My Week with Marilyn, The Perks of Being a Wallflower, and playing a celebrity thief in Sofia Coppola's 2013 true-story, The Bling Ring. In 2014, she appeared in Noah alongside Russell Crowe, and in 2015, starred in the thriller The Colony with Daniel Brühl and the drama Regression with Ethan Hawke.

In 2017, Emma refused the lead role in the acclaimed musical La La Land (2017), but starred in the live-action hit adaptation of Disney's Beauty and the Beast with Dan Stevens, as well as the sci-fi drama The Circle with Tom Hanks.

Two years later, she reappeared on the big screen in the adaptation Little Women (2019), a new version of the novel of the same title published in 1868, which focuses on the four March daughters. She played the role of Meg March, alongside Meryl Streep as Aunt March, Saoirse Ronan as Jo March, and Laura Dern as Marmee.

In addition to her numerous nominations, Emma has been awarded two People's Choice Awards thanks to the quality of her work in Harry Potter and the Deathly Hallows: Part 2 and The Perks of Being a Wallflower.

In addition to her acting skills, Emma Watson is a certified yoga and meditation instructor.