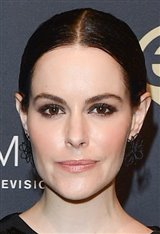 Born and raised in Montreal, Quebec, Emily Hampshire is a noteworthy actress in Canadian television and film.

Her acting career began with an appearance in the popular Canadian television series Are You Afraid of the Dark? when she was a teen. Soon after she starred in the Canadian horror film Dead Innocent. Throughout her career she has appeared in a number of television series such as Doc and Twice in a Lifetime, as well as a recurring role in the show Made in Canada, for which she shared a Gemini Award for Best Ensemble Performance in a Comedy Program or Series.

Emily appeared in a number of television movies and dabbled in voice acting before breaking into feature films. Although she appeared in films such as Snow Cake (for which she received a Genie award nomination) and It's a Boy Girl Thing, her appearance in Cosmopolis opposite Robert Pattinson has gained her the most attention to date, sharing a Birks Canadian Diamond award at the 2012 Cannes Film Festival with their co-star Sarah Gadon.

For her regular role as Steve Budd on the CBC sitcom Schitt's Creek, Emily won a Canadian Screen Award in 2018.

Emily, who is married to Matt Smith, resides in Los Angeles.