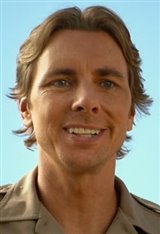 Born and raised in Michigan, Dax Shepard moved to Los Angeles in 1995 to study anthropology at UCLA. After graduation, he decided to pursue his passion for comedy and studied improvisation with the world-famous Groundlings comedy troupe in Los Angeles.

Dax made his feature film debut with a small role in Lions Gate's Hairshirt (1998). But it wasn't until 2003 that his career really took off. After playing a small role in Cheaper By the Dozen (2003) starring Bonnie Hunt and Steve Martin, he was asked to make a couple of guest appearances on Hunt's TV sitcom, Life with Bonnie. As well, he played a field agent on MTV's Punk'd, where his gift for improv earned him a Teen Choice Award nomination for "Choice TV Reality/Variety Star - Male." He also played Jessica Simpson's cousin on MTV's comedy series Making the Video.

Shepard made the move from supporting player to star overnight when he landed a lead role opposite Seth Green and Matthew Lillard in Without a Paddle (2004), a comedy about three city-dwellers who go on a camping trip with disastrous results. After that, he continued to land roles in comedy films, such as Employee of the Month with Jessica Simpson, The Comebacks in 2007 and the 2010 romantic comedy When in Rome opposite his real-life leading lady, Kristen Bell. The pair got to play a couple on the big screen again for the 2012 comedy Hit & Run, which Dax also co-directed. Most recently, Dax starred in The Judge (2014), This Is Where I Leave You (2014), the series Web Therapy (2014-15), the Melissa McCarthy comedy The Boss (2016) and the crime comedy CHiPS (2017), which he also wrote and directed.

Kristen Bell and Dax Shepard are married and have a daughter named Lincoln Bell Shepard. The couple are expecting another child this year. In his spare time, Dax enjoys snowboarding, motorcycling and basketball. He also donates a lot of his time to the Hollenbeck Youth Center, an after-school program for at-risk inner-city youth.