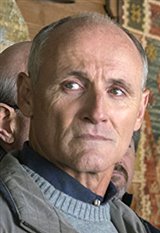 Although born in the States, Colm Feore spent his first few years in Ireland before his family moved to Ottawa when he was three and then Windsor. Adopting Canada as his own, Colm (pronounced Collum) attended Canada's National Theatre School and joined the prestigious Stratford Festival, where he became Associate Director in 1981.

During numerous seasons at Stratford, he achieved fame as one of Canada's premiere stage actors, playing virtually all of Shakespeare's leading men from Richard III and Iago to Romeo and Hamlet, as well as many other characters in classical and contemporary plays. His first film experience was a number of filmed plays he did at Stratford such as The Boys from Syracuse and The Taming of the Shrew (playing the lead in both of them).

While continuing his work on stage, Colm also frequently acted on television and in film and is especially well-known for his performance in the title role of Thirty-Two Short Films About Glenn Gould. Other notable films include Iron Eagle II, Face/Off, City of Angels, The Red Violin (which won him a Jutra Award), The Insider, Titus, Pearl Harbor and The Perfect Son (for which he earned a Genie nomination for Best Actor). However, his most successful film in Canada was the box office hit Bon Cop, Bad Cop (2006), in which he played a straight-laced Ontario-based police officer Martin Ward, who teams up with a slovenly officer from Montreal to solve a crime committed on the border of the provinces.

On television, Colm has landed many roles, including Albert in the telefilm Forget Me Never, Rudolf Hess in the miniseries Nuremberg, and Admiral Aaron in Creature. He has also made numerous guest appearances on such series as War of the Worlds, Forever Knight, Due South, La Femme Nikita, The West Wing and Boston Public. In 2002, he won a Gemini award for his performance as Canada's controversial and flamboyant former Prime Minister Pierre Elliot Trudeau in the CBC mini-series Trudeau.

Colm has three children, Jack, Thomas and Anna, with his second wife, Donna and a son with his first wife, Sidonie Boll. He often returns to work at the Stratford Festival, where he owns a home.

In 2018, he played Detective Charles Gattis in the Netflix original film Anon, filmed in Toronto and co-starring Clive Owen and Amanda Seyfried. He can also be seen on the Netflix series The Umbrella Academy as Sir Reginald Hargreeves.

Most recently, Colm appeared on the big screen in Astronaut (2019), starring alongside Richard Dreyfuss.