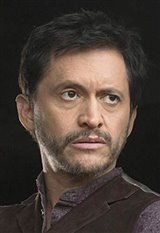 Sometimes credited as Clifton Gonzalez-Gonzalez as tribute to his grandfather, character actor Pedro Gonzalez-Gonzalez, Clifton Collins Jr. broke into mainstream cinema in 1997 with his role as a gang thug in One Seven Eight, starring Samuel L. Jackson.

He has since slowly created an impressive resumé of Hollywood and independent roles in films such as Ray Bradbury’s cult classic, The Wonderful Ice Cream Suit and the Academy Award-winning Traffic starring Michael Douglas and Catherine Zeta-Jones.

He also had a small role in Alejandro González Iñárritu’s multiple award winning drama Babel and an uncredited role in Edgar Wright’s adaptation of the beloved graphic novels, Scott Pilgrim vs. The World.

While most of his roles tend to be in dramas, Collins Jr. proved he was able to successfully play comedy as well when he starred alongside Amy Adams, Emily Blunt and Alan Arkin in Sunshine Cleaning. He then gained public attention for his portrayal of Ayel, the second-in-command Romulan in J.J. Abrams reboot of the Star Trek franchise.

He most recently starred in the thriller Transcendence (2014) alongside Johnny Depp, the drama Knight of Cups (2015) directed by Terrence Malick, the crime thriller Triple 9 (2016) opposite Casey Affleck and Chiwetel Ejiofor, and the post-apocalyptic war drama Man Down (2016) starring Shia LaBeouf and Gary Oldman.

Not long after, Clifton had the opportunity to work with two renowned filmmakers: Clint Eastwood and Quentin Tarantino. He first appeared in the thriller The Mule (2018), then played a role in the dramatic comedy Once Upon a Time in Hollywood (2019), starring Brad Pitt.

In addition to feature films, Clifton regularly takes on television roles as well. His credits include The Shield, Thief, Ballers, and Westworld. For his role in Thief, he received an Emmy nomination. He also has tried his hand at being a director by directing two music videos for the country group, Zac Brown Band.

On January 1, 2017, Clifton married actress Francesca Eastwood, who is 23 years his junior. She is the daughter of Clint Eastwood and Frances Fisher.