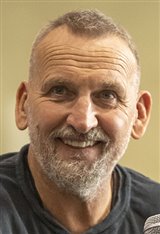 Born and raised in Salford, Manchester, England, Eccleston was trained in the classics at London's Central School of Speech and Drama. His theater work includes A Streetcar Named Desire, at the Bristol Old Vic, Abingdon, Square and Bent at the National Theatre, and Miss Julie in the West End.

A late bloomer in acting, Eccleston decided at 19 to pursue a career in the art, and only made his professional debut at 25 after several years of formal training.

"What I wanted to do was become a footballer," says the long, lanky Eccleston, "or a soccer player, as you call it. I wasn't good enough." He played for a Salford County team. "I wasn't that close. We were watched by scouts but nobody picked me out."

Most widely recognized for his role as the Duke of Norfolk in the Academy Award-winning Elizabeth (1998) opposite Cate Blanchett, Eccleston made his feature film debut in Peter Medack's Let Him Have It. Among his other credits are eXistenz, A Price Above Rubies, Jude, Shallow Grave, and Heart.

Eccleston has also appeared on several British television series and movies. He was honored with two Press Guild Awards for best actor for his performance on Hillsborough, and Our Friends in the North. The Latter also garnered him a BAFTA Best Actor nomination. Other British television work includes Cracker, Friday on My Mind, Death and the Compass, Clocking Off, Poirot, and Inspector Morse.

After all his experience, one thing still bugs him about the acting industry. "I've been stuck firmly in my class—which is working class," the actor says, "I find that infuriating and patronizing and humiliating. I want out of that!"