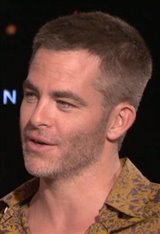 Born in Los Angeles, California to successful actors Robert Pine and Gwynne Gilford, Chris Pine decided to follow in their footsteps, even though both had worked hard throughout their careers without ever achieving star status.

Chris got his start in theater, performing numerous classic roles at the Williamstown Theater Festival, University of California and various theater companies in the Los Angeles area.

His TV debut was a 2003 guest shot on ER, quickly followed by guest appearances on The Guardian and CSI: Miami. Later that year, Chris got the big break that his parents never had—a starring role in the big budget motion picture The Princess Diaries 2: Royal Engagement (2004), playing the love interest of the lead character.

Pine kept busy doing guest appearances on shows such as American Dreams and Six Feet Under before landing his next leading man role opposite Lindsay Lohan in Just My Luck (2006). He's since filmed roles in several top Hollywood movies, including the highly coveted role of Captain Kirk in Star Trek (2009). He also co-starred opposite Denzel Washington in Unstoppable (2010), as a spy fighting for Reese Witherspoon's love in This Means War (2012), a man who searches out his long lost sister in People Like Us (2012) and the voice of Jack Frost in Rise of the Guardians (2012). He then reprised his role in the sequel Horrible Bosses 2 (2014) and played Prince Charming in the musical Into the Woods (2014).

More recently, he reprised his role in Star Trek Beyond (2015), as well as starred in The Finest Hours (2016), Hell or High Water (2016) and the fan favorite, Wonder Woman (2017). In 2018, he played a father who goes missing in the film adaptation of Madeleine L'Engle's classic novel A Wrinkle in Time, opposite Oprah Winfrey.