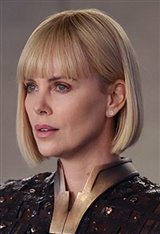 An only child of Afrikaaner parents, Charlize Theron was born and raised in Benoni, South Africa, where she grew up on a farm. The youngster devoted her free time to studying ballet and American movies: A particular favorite being the Tom Hanks-Daryl Hannah mermaid romance Splash, which caused the wide-eyed Charlize to develop a huge crush on Hanks.

Her study of ballet landed her at a performing arts school in Johannesburg. After winning a modeling contest at 16, an Italian fashion scout informed her there was a modeling contract awaiting her in Milan. She went. Unable to land any major modeling contracts or cover shots, the newness of her latest endeavor wore thin. When an American magazine flew her to New York for a photo shoot, Charlize decided to stick around and make a new life for herself in the States.

Arriving in the Big Apple at 18, Charlize did modeling jobs whenever she could get them and kept up with ballet. But when a career-ending knee injury forced her to give up dance, she was troubled. At her mother's suggestion, she went to Southern California in pursuit of becoming an actor.

Newly arrived, she threw an impressive tantrum when a bank teller refused to cash an out-of-state check. Hollywood talent manager John Crosby was behind her in line, and after helpfully explaining that she could cash her check at any post office, asked if she was an actress. Charlize replied that she wasn't, but that she fully intended to become one. Crosby offered his card. Charlize got in touch with him, and he agreed to take her on as a client.

After countless unsuccessful auditions, she finally landed a role in 2 Days in the Valley which was immediately followed by a chance to work with childhood crush Hanks on his directorial debut, 1996's That Thing You Do! He cast her in a small role as an all-American everygirl who finds love with the dentist of her dreams after her drummer boyfriend starts spending too much time with his bandmates.

The following year, Charlize logged prominent roles in decidedly different lawyer flicks, the Michael Richards farce Trial and Error and the Keanu Reeves-Al Pacino thriller The Devil's Advocate. Though absent from theaters during most of 1998, she turned heads with her bang-on portrayal of a shallow supermodel in Woody Allen's Celebrity that fall, and made her debut in a starring role opposite Bill Paxton in Disney's remake of Mighty Joe Young.

Her star has continued to rise since then, in the romantic comedy Sweet November again starring with Reeves, then as a mother whose child is kidnapped in Trapped and as a serial killer/prostitute in Monster, based on a true life story. For the latter, she gained 30 pounds and underwent a laborious daily makeup routine to play executed murderer Aileen Wuornos, and for her effort, Charlize received not only a Golden Globe award, but an Oscar in the Best Actress category at the 2004 Academy Awards. She again received Golden Globe and Academy Award nominations just two years later for her work in North Country (2005). Charlize has since been keeping busy with roles as a struggling author in Young Adult (2011), the Evil Queen in Snow White & the Huntsman (2012) and a space explorer in Prometheus (2012). She then starred in the comedy A Million Ways to Die in the West (2014) and in Mad Max: Fury Road (2015).

She reprised her role as tehe evil queen in the sequel, The Huntsman: Winter's War (2016) alongside Emily Blunt and Chris Hemsworth, lent her voice to the animated film Kubo and the Two Strings (2016), starred in The Fate of the Furious (2017) with Vin Diesel and Dwayne Johnson, played the title role in the spy thriller Atomic Blonde (2017) alongside James McAvoy and starred alongside David Oyelowo in the comedy Gringo (2018).

In order to play the overworked mother of three young children in Tully (2018), she gained almost 50 pounds. The following year, she took on the role of Megyn Kelly in the film Bombshell (2019), based on a true story. For her work in the film, she earned nominations from the Academy Awards, Golden Globes and BAFTAs.

In 2021, Charlize reprised her role as Cipher in F9: The Fast Saga.

Charlize, who received a star on the Hollywood Walk of Fame on September 29, 2005, was linked to actor Stuart Townsend from 2002 to 2010. She began dating Sean Penn in December 2013 and they were engaged for a short time, but split in June 2015.