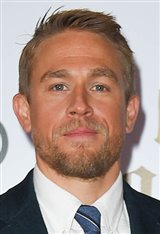 Charlie Hunnam was born in Newcastle, England, but moved to the Lake District when his mother remarried. In 1995, when he was 15, he was horsing around in a shoe store with his friends, and in a moment of silliness, he asked a perfect stranger what she thought of his shoes. The woman kept looking at him until he grew uncomfortable. She later approached him while he was at the cash register buying the shoes and asked him if he’d ever thought about acting. It turned out she was the production manager for the British teen TV series Byker Grove, and she took Hunnam to meet the director. The teenager landed a role on the long-running series, and his career as an actor began.

Two more recurring roles on different British series followed, and in 1999 he landed a lead role as a confused 15-year-old on the series Queer as Folk. The show garnered him a huge fan following. The series was shown in the United States, and Charlie consequently moved to the U.S. to break into the American market. He quickly landed three guest appearances on a new series called Young Americans (2000), playing an unlikeable character named Gregor Ryder. Soon after, he landed a role on a new TV series called Undeclared, playing a college student.

Charlie made his U.S. motion picture debut playing Katie Holmes’ college boyfriend in 2002, in the thriller, Abandon. He landed the title role in his next picture, Nicholas Nickleby, a U.S./U.K. co-production. Hunnam then went on to join an all-star international cast, including Nicole Kidman, Renée Zellweger and Jude Law for the feature film, Cold Mountain (2003). In 2008, he landed a recurring role as Jackson 'Jax' Teller in the hit television series Sons of Anarchy. He also starred alongside Eric Bana and Kate Mara in the 2012 thriller Deadfall.

His other projects include the action adventure biopic The Lost City of Z (2017) and King Arthur: Legend of the Sword (2017). The former film profiles the explorations of Col. Percival Fawcett, who disappeared in the Amazon during the 1920s. The latter is Guy Ritchie's movie about the rise of King Arthur.

In 2020, he was part of an ensemble cast that included Henry Golding, Michelle Dockery, Colin Farrell and Hugh Grant in Guy Ritchie's latest crime actioner, The Gentlemen (2020).

Charlie met actress Kate Towne (Go, Sweet Home Alabama), the daughter of screenwriter Robert Towne, at a Dawson’s Creek audition. Neither got a role on the show, but they kept in touch and were married in 1999. Unfortunately, they divorced in 2002.