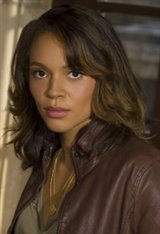 Carmen Elizabeth Ejogo was born in Kensington, England, to Nigerian father Charles, and a Scottish mother Elizabeth. Her father died in a car crash when Carmen was young, forcing her mother to work cleaning jobs to make ends meet. Growing up in an affordable housing complex in London with her younger brother Charles, Carmen attended the Oratory Roman Catholic Primary School in Chelsea until 1984 and was then enrolled in the Godolphin and Latymer School.

Carmen was recruited by her art director neighbor to appear in a pop video, which led to some modeling jobs while she was still in school. Her acting debut came in 1986 at age 12 in Julian Temple’s rock musical Absolute Beginners alongside music icons Sade and David Bowie. At 16, she landed a job hosting her own pop music program called The Carmen Ejogo Video Show, for British Satellite Broadcasting.

Four years later, Carmen began her early TV career as a presenter for the children's TV show Saturday Disney from 1993 to 1995. However, Carmen’s real passion was to become an actor.

Carmen made her movie debut in the American comedy thriller Metro (1997), starring Eddie Murphy. Roles in British films such as The Avengers (1998) alongside Ralph Fiennes and Uma Thurman and Love's Labour's Lost (2000) directed by and starring Kenneth Branagh followed. Back in the States, she played a role in What’s the Worst That Could Happen? (2001) starring Martin Lawrence and Danny DeVito.

In 2000, while working on the HBO TV film Boycott, about Martin Luther King Jr. and the events leading up to the 1956 Montogomery Bus Boycott, Carmen met actor Jeffrey Wright (The Hunger Games). Jeffery played King, and Carmen portrayed his wife, Coretta Scott King. Jeffery and Carmen married in August 2001 and settled down in Brooklyn, New York, where they had a son, Elijah, and a daughter, Juno. The couple divorced in 2014. The marriage was Carmen's second one — she'd previously been married to British musician Tricky, a.k.a. Adrian Thaws.

Carmen would play Coretta Scott King for a second time, starring in 2015’s Selma, alongside David Oyelowo as Martin Luther King Jr. Directed by Ava DuVernay, the film was highly praised, and earned not only four Golden Globe nominations, but was nominated for Best Picture at the Academy Awards. It took home the Oscar for Best Original Song — "Glory" by Common and John Legend.

Following Selma’s success, Carmen next landed the role of Jane/Elaine in Born to Be Blue (2015), a "semi-factual, semi-fictional" account of the life of jazz musician Chet Baker (Ethan Hawke). The film premiered at TIFF in September 2015, and Carmen’s performance was nominated for a Canadian Screen Award.

In 2016, she appeared as magical President Seraphina Picquery in the much-anticipated Harry Potter spinoff, Fantastic Beasts and Where to Find Them (2016).