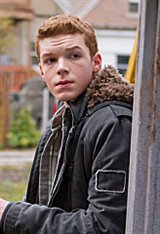 Born in Santa Monica, California, Cameron Monaghan became a child model at the age of three, and then an actor by age seven. He was raised by his single mother Diane, who worked as an insurance claims specialist. They relocated to Florida shortly after Cameron was born, and because her son was very outgoing, Diane submitted his pictures to modeling agencies. From there, she had him involved in community theater by the age of five. Cameron claims he learned how to read teleprompters was from reading captions on TV.

In 2016, now too old to be nominated for Young Artist Awards, Cameron was nominated for a Teen Choice Award as Choice TV Villain for his role as Jerome Valeska in the hit TV series Gotham.

Cameron also has appeared in quite a few movies, playing a supporting role alongside Adam Sandler in the comedy Click (2006), a traffic cop in The Santa Clause 3: The Escape Clause(2006), Corey Doyle in Prom(2011), and James in Amityville: The Awakening(2017).

Cameron was brought in as a cast member for the Showtime drama series Shameless in 2010, which earned him a Critics’Choice TV Award nomination for Best Supporting Actor in a Comedy Series. In the series, he plays gay teenager Ian Gallagher. The show is a hit, with an eighth season already in production.

His biggest role to date on the big screen comes from portraying Asher in the film The Giver (2014) alongside Brenton Thwaites, Taylor Swift and Meryl Streep.

Cameron has said that he wants to get into script writing one day, telling Interview magazine, “I love to write, so I think writing would be the next natural step. And if I’m making something that I’m writing, it would also probably make sense to be a producer and have some creative input from that perspective as well."

The actor likes to keep busy, with multiple projects releasing throughout the year. He says he “goes crazy if I’m not working. I find it harder to have down time. I don’t know what to do with myself.”

Cameron also has a deep interest in music. He plays guitar, harmonica and drums and also taught himself to play the piano. Cameron considers himself to be an athlete, participating in various activities such as boxing, snowboarding and skiing. He has also studied kickboxing, Taekwondo and other martial arts.