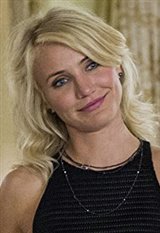 Since her eye-popping (literally, in the case of Jim Carrey!) debut in The Mask, Cameron Diaz became the blonde to watch in Hollywood—for more reasons than one. With her mile-wide smile and luminescent blue eyes, this San Diego native held her own alongside Julia Roberts in the radiance department as the not-so-naive bride-to-be in My Best Friend's Wedding. You know you've got star power when you can steal focus from Jim and Julia.

The adventurous Diaz landed a contract with the Elite Modeling Agency at age 16. She soon jetted off to Japan, joined only by a 15-year-old fellow model. She spent the next five years bouncing around the globe—Australia, Morocco, Paris, Mexico— before settling in Hollywood. "Believe me, you can get into a lot of trouble being 16 years old in a foreign country with no adult telling you when to come home." Sure enough, she was hospitalized for alcohol poisoning in Australia when she was just 18.

Since The Mask Cameron has been busy with roles in a number of big screen ventures: dumping her hubby for brother-in-law Keanu Reeves in Feeling Minnesota, playing Mrs. Harvey Keitel in Head Above Water, and running away with Ewan MacGregor in A Life Less Ordinary. Her admirable work won her the N.A.T.O./ShoWest title of "Female Star of Tomorrow".

It was her role in the raunchy There's Something About Mary (1998) that made her a bonafide A-list star. Not only was the film a big hit, but Diaz won an American Comedy Award for Funniest Actress in a Motion Picture (Leading Role) and received a Golden Globe nomination.

She received accolades for her work in Being John Malkovich (1999), including BAFTA and Golden Globe nominations, then went on to star in the big box office hit, Charlie's Angels (2000), co-starring Drew Barrymore and Lucy Liu. She received two more Golden Globe nominations for Vanilla Sky (2001) and Gangs of New York (2002), and has also provided the voice of Princess Fiona in Shrek (2001) as well as three Shrek sequels.

She went on to earn $20 million for Charlie's Angels: Full Throttle (2003), but received her first Razzie nomination as Worst Actress. Still, she went on to star in a long list of popular films, like the romantic comedy What Happens in Vegas (2008), the emotionally-charged drama My Sister's Keeper (2009), the comedies Knight and Day (2010) and Bad Teacher (2012) and What to Expect When You're Expecting (2012). Most recently, she starred in The Other Woman (2014) and Sex Tape (2014).

Cameron has been linked romantically to producer Carlos De La Torre, actor Matt Dillon, Jared Leto (they were actually engaged for three years before calling it quits), pop superstar/actor Justin Timberlake and New York Yankees baseball player Alex Rodriguez. On January 5, 2015, after seven months of dating, she married musician Benji Madden. It is the first marriage for both.