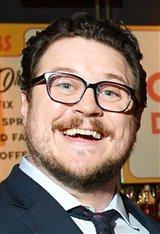 Cameron Britton is an American actor best known for his work as Edmund Kemper on David Fincher's Netflix series Mindhunter.

He was living in his car in Los Angeles, performing occasionally in plays at the Loft Ensemble, when he began getting screen roles in 2014 in a variety of films such as the internet release Camp Takota, the indie film Redeemed, and Day Out of Days (2015), which screened at a handful of film festivals.

He also was cast in small roles on TV shows such as Unusual Suspects, Lab Rats, and Vox Influx before achieving a recurring role on the sci-fi crime drama Stitchers in 2015, going on to appear in 22 episodes over the next two years. By 2017, he was cast in the role of infamous serial killer Edmund Kemper on the Netflix series Mindhunter, for which he received a Primetime Emmy nomination and a Gold Derby TV Award.

Cameron made his major motion picture debut in as the hacker Plague in Sony's Lisbeth Salander reboot, The Girl in the Spider's Web (2018). The same year, he began working on the Netflix sci-fi series The Umbrella Academy, playing the time-traveling assassin Hazel. The show, which is based on a comic book series, was popular with fans as soon as it debuted on the streaming service in February 2019.

Cameron makes his home in Los Angeles with his wife and their cat.