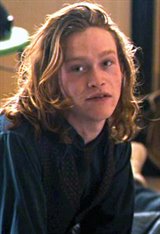 Southern actor Caleb Landry Jones was born in Garland, Texas and raised in Richardson, Texas. Jones originally began a career in the music industry as a vocalist and drummer for psychedelic rock band Robert Jones, with friends Robert Hudson and AJ Durham.

Their first album Men and Their Horses digitally released in 2009, but when Jones' acting career took off, the band had to take a break. As well, the other members had to fulfill commitments to school. .

Although Jones was featured in the 2007 movies No Country for Old Men and Superbad, it wasn't until The Last Exorcism (2008) hit the big screen that Jones' acting career was truly on a roll.

Later, Caleb would star in the Joe Albany biopic Low Down (2014) with John Hawkes, Elle Fanning and Glenn Close, as well as Roland Emmerich's drama Stonewall (2015).

His latest credits include the 2017 thriller Get Out with Allison Williams and Catherine Kenner, Three Billboards Outside Ebbing, Missouri and The Florida Project, which both premiered at TIFF in 2017, and the drama American Made (2017) starring Tom Cruise.