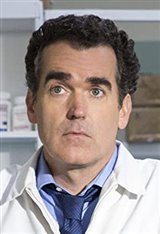 Born in Saginaw, Michigan, many of his family members have gone into the entertainment world. His uncle, Brian Kelly, was best known for his starring role as Porter Ricks on the NBC TV series Flipper (1964 to 1967), as well as being a producer of the film Blade Runner (1982). Two of Brian's three siblings are also actors.

Brian graduated from Northwestern University’s School of Communications before getting his start in theatre. He arrived in New York in 1991, making his Broadway debut just two years later in the musical Blood Brothers. He held multiple small roles on and Off-Broadway before receiving a Tony Award nomination in 2002 for his portrayal of Sidney Falco in Sweet Smell of Success. Other Broadway credits include Titanic, Dirty Rotten Scoundrels, Next to Normal, and Shrek the Musical, for which he was once again nominated for a Tony Award.

He held multiple small roles on television before joining the cast of the NBC musical series Smash as a series regular in 2011. Brian has also made guest appearances on The Good Wife, The Big C, Person of Interest and many more.

Before becoming a smash-hit on Broadway, Brian originated the role of King George in the Off-Broadway run of Hamilton in 2015. Immediately following that, he starred as one of the lead roles in the Broadway musical Something Rotten! for which he was nominated for multiple awards, including his third Tony nomination. In April 2017, he reprised his role as King George in Hamilton for a limited engagement on Broadway.

Later that year, Brian joined the cast of the Netflix original series 13 Reasons Why, playing Andy Baker for two seasons.

Brian has appeared in several feature films, including the Academy Award-winning film Spotlight. His other credits include Molly’s Game (2017), Mark Felt: The Man Who Brought Down the White House (2017), Bombshell (2019), West Side Story (2020), and many more.

He returned to theater in 2019 to perform in the Broadway play The Ferryman. The play was directed by Sam Mendes and won a Tony Award for Best Play.

In his free time, Brian likes to spend his time running. He calls himself an "avid marathon runner," and has participated in both the Chicago and New York Marathons. He is large supporter of the Field Neurosciences Institute in his hometown, which aims for prevention, early diagnosis, care and cure of neurological diseases, disorders and injuries.

Brian lives in New York City with his wife Jennifer. They have one daughter, Grace.