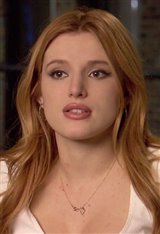 Annabelle Avery “Bella” Thorne was born in Pembroke Pines, Florida. Taking after the examples of her older siblings, she began her career as a child model; gracing the covers of catalogues, national and international magazines, and starring in dozens of commercials. Her family soon thereafter relocated to California where the children could continue their modeling careers and break into acting.

In 2006, Bella began adding guest appearances on television shows to her resumé and in 2007, she played a young Taylor Townsend on an episode of The O.C. and received her first Young Artist Award nomination. For the 2007 to 2008 season, she landed a recurring role as Margaux Darling on the ABC drama Dirty Sexy Money and in 2008, she was cast alongside Christian Slater and Taylor Lautner in the NBC action drama My Own Worst Enemy. Although the series was short-lived, Bella was recognized with a 2009 Young Artist’s Award in 2009 for her role as Ruthy Spivey.

In 2009, Bella received her big break when she was cast in the Disney Channel dance series, Shake It Up!, alongside Zendaya. The role called for a multi-talented actress – though Bella had singing experience, she was encouraged to take dance lessons three times a week. The show was a success, running for three seasons and making Bella a star with the younger set. The momentum continued when Bella signed a recording contract with Hollywood Records in 2013.

She began to get roles in feature films. Her first role following the conclusion of Shake It Up! was alongside Adam Sandler and Drew Barrymore in the comedy Blended (2014). She also continued to work with Disney, appearing in their major motion picture Alexander and the Terrible, Horrible, No Good, Very Bad Day with Steve Carell and Jennifer Garner. In 2015, she starred in Big Sky and The DUFF.

In 2016 Bella appeared in Tyler Perry's BOO! A Madea Halloween (2016), and Keep Watching (2016). In January 2017, she starred as the lead in the horror film Amityville: The Awakening as Belle, alongside Jennifer Jason Leigh, and in 2018, she teamed up with Patrick Schwarzenegger in the romantic drama Midnight Sun (2018). She was then seen on the big screen in the thriller Assassination Nation (2018), which premiered at TIFF.

In 2020, she returned to reprise her role in the Netflix film The Babysitter: Killer Queen, and also starred in the drama Infamous.

On a personal note, Bella lost her father to a car accident in 2007. She also struggled with dyslexia as a child and was often teased about it in school, but overcame it with home schooling, help from learning centers and reading everything she could. She prides herself on her philanthropy and spends her free time helping the Nomad Organization, which provide the necessities to orphaned and displaced children living in Africa. Bella also supports the Humane Society and the Cystic Fibrosis Foundation and sponsors a child in Kenya.

A natural blonde, Bella dyed her hair red in 2009 and has kept it that way ever since. For fun, she enjoys soccer and playing with her numerous pets, which includes two dogs, several cats and a turtle. She also loves to read and listen to music.