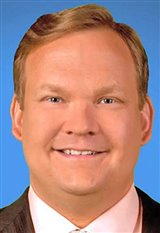 Andy Richter was born in Grand Rapids, Michigan, but raised in Yorkville, Illinois. He attended Columbia College in Chicago as a film major in the late '80s.

While attending college, Andy starred in a variety of student films and videos to learn the basics of comedic acting and writing. After leaving school, he obtained a job as a production assistant on commercial shoots in Chicago.

In 1989, Andy began taking acting classes at Chicago's Improv Olympic, allowing him to branch out into the world of comedy working with The Comedy Underground. He was then asked to play Mike Brady in the stage production The Real Live Brady Bunch in New York City. When two of Andy's fellow castmates in The Brady Bunch were hired for the hit comedy series Saturday Night Live, it gave Andy an opening. One day at an afterparty, he met SNL writer Robert Smigel who hired him two years later as a writer for Late Night with Conan O'Brien. However, it seemed the writing position was not a good fit for Andy, who was instead upgraded to Conan O'Brien's sidekick just weeks before the show debuted.

After seven years alongside Conan, Andy left the show on May 26, 2000 to pursue a career in acting. Andy's career beginnings weren’t as successful as he’d hoped. He starred in Fox's Andy Richter Controls the Universe (2002), but it was cancelled after two seasons. His next project was on the television series Quintuplets (2004), which was cancelled after its first season.

Andy was married from March 1994 to August 2019 to American actress Sarah Thyre, with whom he has two children.