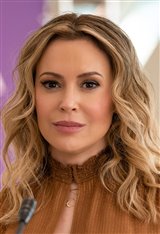 Familiar to most as Samantha Micelli from the hit sitcom Who's the Boss, Alyssa Milano has come a long way since playing Tony Danza's TV daughter.

As a child star, Milano has always been in the public eye. She got her first taste of acting at the age of seven when her babysitter brought her to an open audition for the first national tour of Annie. Milano landed a part as an orphan. For the next 18 months she and her mother traveled with the crew doing performances of the popular Broadway musical. Acquiring a reputation as an energetic and compelling actress, Milano left the production to do off-Broadway performances and television commercials.

In 1984, at the age of 11, she landed her breakthrough role on ABC's Who's the Boss. In order to pursue this opportunity and further her acting career, the Milano family uprooted from Staten Island, NY, and moved across the country to Hollywood, CA. This proved to be a wise choice for her acting career as the TV show was a huge success.

Milano first appeared on the big screen as Diane in Old Enough (1984), a dramatic movie about social differences and growing up. Shortly after, she starred in Commando (1985) as Jenny Matrix, the daughter of special agent John Matrix, played by Arnold Schwarzenegger. The movies were lining up for Milano and as she matured she started accepting various roles in adult-targeted films such as Embrace of the Vampire (1994), Confessions of a Sorority Girl (1994) and Deadly Sins (1995), in hopes to shed her nice girl image.

In Pathology (2008), Alyssa starred with Milo Ventimiglia and Michael Weston in a thriller about medical students trying to commit the perfect murder.

Besides acting and producing, she finds enjoyment in humanitarian work and was appointed Founding Ambassador for the Global Network for Neglected Tropical Disease. She is also a UNICEF Goodwill Ambassador for the United States and is a spokeswoman for PETA.

Most recently, she played the role of Renata in the Netflix original TV series Wet Hot American Summer: 10 Years Later (2017).